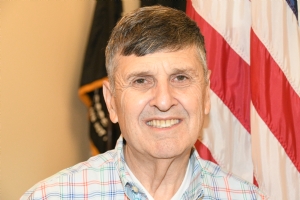 A Vietnam Veteran, I served with the 82ndAirborne Brigade at Fort Bragg, NC (1968) and 173rd Airborne Brigade in Vietnam (1969) as an airborne Infantry SGT (E-5 and E-6).
Served 29 years in the California National Guard and the United States Army Reserves, retiring in 2000 with the rank of Major.
University of New York - BA in Liberal Studies with a concentration in Engineering and Mathematics in 1989.
Teaching credential through National University in 2000 and taught middle school and high school mathematics through pre-calculus for 15 years.
Employed as a law enforcement officer with the Sacramento Police Department and the State of California from 1971 through 2000.
I am a life long resident of Sacramento with my great-grandfather bringing his family to Sacramento in 1894.  I have been married nearly 50 years to my wife Rachel, we have six children and 22 grand-children.

Canteen is Open – Monday to Thursday 2 to 6 PM